Last time Decibel heard from Seattle splatterrock legend, Blaine “Lord Zippy” Cook, former vocalist of some of the city’s most influential punk and metal bands—from the Fartz to the Accüsed—he was manning the grill at his newly opened burger joint, Zippy’s Giant Burgers and fronting his post-Accüsed band, Toe Tag. A decade (and one ongoing pandemic) later, we find the nonstop bundle of furious energy embarking on a whole new endeavor from his West Seattle home (while still keeping the splatterrock flowing with both the Accüsed AD and Toe Tag).

For the past 18 months, Cook has been making videos behind his kitsch-laden “Wicker Bar” demonstrating his mixology skills and occasionally doing cooking videos from his kitchen. What started as a pandemic project, ultimately resulted in a 100+ episodes of cocktail-making insanity and a brand new self-published cocktail recipe book/graphic novel, Cocktails and Mixed Drinks From the Wicker Bar. Each of the 25 recipes in the book is accompanied by an original illustration solicited from the Accüsed AD fans and friends. It’s safe to say, there’s no other cocktail book out there like this one …

Last year saw the release of The Ghoul in the Mirror, the latest from The Accüsed A.D., the band featuring classic lineup members vocalist Blaine Cook and guitarist Alex “Maggot Brain” Sibbald. The collection was produced by Jack Endino (Screaming Trees, Toxic Holocaust) and mastered by Scot Hull of the almighty Pig Destroyer, and finds Blaine and Alex joined by the rhythm section of bassist Steve McVay and drummer Chris Gohde.

Life After Death: The Accused A.D.

The 1980’s punk and hardcore scenes were a breeding ground for artists and bands who were looking to do their own thing. bands and labels were popping up and releasing great new music that seemed to fall under the “punk” or “hardcore” music umbrella. In the 80’s the genre of “crossover” was birthed with bands like D.R.I., Corrosion Of Conformity, Suicidal Tendencies and the like. One band that quickly stood out with their own brand of crossover they called “Splatterrock” was Seattle’s Accused.

The bands record cover artwork was as off the beaten path as their style of crossover. They quickly became a cult favorite not only because of the aforementioned Splatterrock style, but because of their insane live shows. Of all of the bands who have come out of the punk and hardcore scenes there isn’t another bands that has ever sounded like the Accused. People haven’t even tried. Blaine Cook’s vocal delivery is so original and such as huge aspect of the Accused sound that the band without him at the mic can’t be considered the Accused.

“The Seattle horror-punk/metal/crossover band The Accused formed in the early ’80s and released numerous albums, the last in 2009. The Accused A.D.‘s lineup includes former The Accused vocalist Blaine Cook and guitarist Alex “Maggotbrain” Sibbald along with Steve “The Beast” McVay and drummer Mickey Widmere (The Poison Idea).

This incarnation ( has the same “splatter-rock” aesthetic as the original band. Tracks like “Hate Your Friends” and “Pick The Sores” are raw and fast with that crossover vibe, while songs such as “Dirt Merchant” and “Looking For The Smell” are more in the traditional metal vein with catchy riffs and a medium pace. They go back to the classic rock era for a punked up cover of Rick Derringer’s “Rock And Roll, Hootchie Koo.” Cook’s distinctive vocals and the band’s raucous music makes this an enjoyable listen.”

THE ACCÜSED A.D. Brings The Slow-Churning, Snotty Punk On “A Terrible Tail”

The Accüsed A.D., the band formerly known as Toe Tag, recently signed to Blackhouse Records. The band will release their new album The Ghoul in the Mirror on May 10, which is also their first under the The Accüsed A.D. moniker. We’re proudly premiering their new song “A Terrible Tail” today, which vocalist Blaine Cook says is lyrically a tribute to the pre-Jerky Boys project Bar Bum Bastards. Musically, it’s a snotty-ass slow-churning punk riff machine that demands to be blasted, lest you piss off the likes of Martha Splatterhead.

THE GHOUL IN THE MIRROR LP/CD/DIG

CVLT Nation has premiered “A Terrible Tail” a new track from The Accüsed A.D. this morning.  Churning riffs, choked vocals and a raw rhythmic attack, the track is possessed of the bastard horror-punk/metal hybrid sound known as “splatter-rock” that the band members originated.

With lyrics that deal in part with grave-robbing and making a skull-bong out of someone’s departed mutha, there’s no mistaking which band this is.  Speaking on the track, vocalist Blaine Cook said “it’s a tribute to the ‘Bum Bar Bastards’ who did a series of prank calls from 1975-1978. These calls were referred to as ‘the tube bar tapes’ or ‘the red tapes.’ They were pretty legendary and definitely not acceptable by today’s standards.”

Listen to “A Terrible Tail” via CVLT Nation premiere here:

The track is taken from the forthcoming full-length, The Ghoul In The Mirror for Blackhouse Records (May 10th) .As evidenced from the album artwork, their toothy undead muse, Martha Splatterhead is also along for the ride.

The label has launched an album pre-order which boasts some essential collector items for the band’s fans and catalogue completest. The first 100 pre-orders will receive Toxic green Accüsed sunglasses and exclusive comic-book.  The first 150 pre-orders will receive the comic book.  There will only be 200 CD copies available and 400 vinyl copies available (the latter divided into black and clear with yellow or red splatter patterns).

Produced by the legendary Jack Endino (Nirvana, Mudhoney) and metal mastered by Scott Hull (Pig Destroyer, Agoraphobic Nosebleed) himself this is a ripper of an album!

The Accüsed A.D. is an off-shoot of the original Accüsed who formed in 1981 in Seattle and became a foundation for the sub-genre of metal/punk known as cross-over.  However as Decibel Magazine proclaims in the issue 175, which inducts the band’s highly influential 1987 full-length More Fun Than An Open Casket Funeral, “this is where ‘Splatter Rock’ originated-both figuratively and literally-as the band peppered its graphic songs with both politicial/social outrage and obscure horror-movie samples.”

The band is currently on a U.S. run that will conclude with a performance at the Maryland Death Fest in May.

Ladies and Gentlemen, please welcome The Accused AD to Blackhouse Records. With the knife-wielding, toothy-grinned Martha Splatterhead at their side, Seattle’s own THE ACCUSED carved their way into the underground music scene by becoming one

Review: THE ACCUSED AD – ‘The Ghoul in The Mirror’ [Official Video]

Blaine Cook (also known as The Wizard) is a musical figure who has been around since the 80’s. He started his music career fronting the Seattle based political punk band The Fartz, but he is perhaps best know for his time in Splatter Rock kings The Accused. Founded in 1981, The Accused were one of the most important bands of the time as they were one of the first to bridge the gap between Punk Rock and Thrash Metal which eventually lead to the creation of Crossover. Despite being an influence on everyone from Lamb of God, Cannibal Corpse, Dead Cross and Municipal Waste, The Accused largely remained underground and underappreciated. Fast forward to 2019 and we no longer have The Accused; but we do have something just as great: The Accused AD! This is a band that features the iconic vocals of Blaine Cook as well as the talents of Alex “Maggotbrain” Sibbald, Steve “The Beast” McVay, and Poison Idea drummer Mickey Widmere! Later this year, The band is scheduled to release a limited edition tape entitled ‘The Ghoul in the Mirror’ via Blackhouse Records Ltd. The album will be produced by Jack Endino (Nirvana, Toxic Holocaust) and mastered by Pig Destroyer’s Scott Hull!
Read More …..

Blackhouse Records has signed the legendary crossover thrash band THE ACCUSED, now dubbed THE ACCUSED AD! Check out the band’s new song and video “Juego Terminado”, coming from their new LP “The Ghoul In The Mirror”, to be released on Vinyl, CD, CS, and Digital!

With the knife-wielding, toothy-grinned Martha Splatterhead at their side, Seattle’s own THE ACCUSED carved their way into the underground music scene by becoming one of the cornerstones of crossover music that melted faces in the 80s across the globe––A punk/metal fusion that planted its ever-growing seed in modern heavyweights such as MUNICIPAL WASTE, LAMB OF GOD, CANNIBAL CORPSE, the Patton/Lombardo project DEAD CROSS, and many more.
Read more…..

The Accused AD is one of the current versions of Seattle crossover thrash vets The Accüsed, who are fronted by Blaine Cook (who joined The Accüsed in 1984 after leaving The Fartz). The lineup also includes Alex Sibbald, Steve McVay, and Mickey Widmere. The Accused AD are gearing up to release new music this year, mixed and engineered by Seattle grunge legend Jack Endino and mastered by Pig Destroyer’s Scott Hull. The cover art was done by KC Angel. That’s all we know for now, but stay tuned for more.
Read more……

Whoever it was that said that you should never meet you heroes obviously never met Blaine Cook, former vocalist with The Fartz and The Accused and the current frontman of The Accused AD and Toe Tag. The Accused were one of the first Hardcore / Crossover bands that I ever heard after Tommy Vance played Take My Time, on the Friday Rock Show in 1986 and I immediately fell in love with their raw, visceral, brutal crossover that, thanks to the anger soaked vocals of Blaine Cook, carved its way into my cerebellum. Their music has been part of my life for the last three decades and some spare change, and the vocalist whose venom and fury forever change my life, has been my friend for the last fifteen years or so. He is, without a shadow of a doubt, one of the most open, honest and genuinely nice people I know . 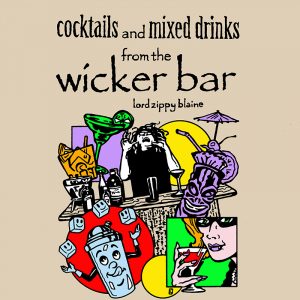 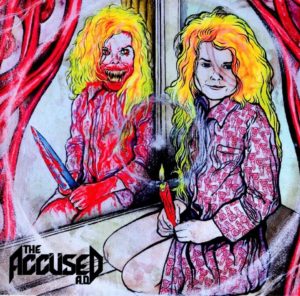